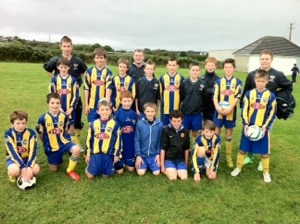 Killorglin Under 13 side that faced Killarney Celtic in the League

Despite a nervy start on a greasy pitch, Killorglin settled in to the game and were unlucky on a number of occasions. But a fantastic header off his own line by Jack O’Connor kept the sides level after 15 minutes. Then a fantastic run by David Mangan gave Killorglin a penalty it was coolly dispatched by Jack O’Connor. And Jack almost doubled the lead when a long range effort was parried by the Celtic keeper. David Mangan almost got a second just before half time, but the game was 1-0 at half time.
Early pressure in the second half from Celtic saw them hit the post, and shortly after they were level after some sloppy defending. And soon after they took the lead when a dangerous ball across the box crept in off the far post. Alex O’Connor was being kept busy in goal and made some fine saves in the conditions. Despite some half chances, the game finished 2-1.